U.S. Ambassador to Turkey John Bass has held a visit to daily Hürriyet in Istanbul on Sep. 16, and urged that freedom of press and freedom of expression are universal rights and central components of healthy vibrant democratic societies... 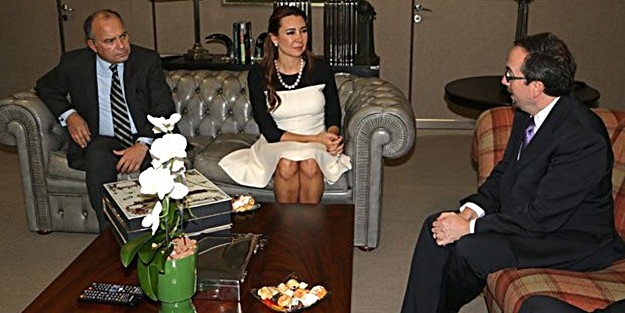 John Bass stressed that, he has visited Hürriyet to demonstrate “how important those rights are and how strongly they believe they should be freely exercised, in democratic societies”.

John Bass held a meeting with Hürriyet Chairwoman Vuslat Doğan Sabancı and daily Hürriyet Editor-in-Chief Sedat Ergin. Following the meeting, the Ambassador visited the newsroom of daily Hürriyet, where he met executives, columnists, journalists and the staff within the dailies of Hürriyet, Radikal and Hürriyet Daily News along with the internet division.

Bass made a brief press statement at the newsroom and in his speech beginning with “Meslektaşlarım” meaning “my colleagues” in Turkish, Bass emphasized that journalism was a valuable profession in terms of democracy and freedom of press and opinion were central components in democratic societies.

Hürriyet Chief Editor Sedat Ergin thanked Bass for his support and said, “It is a rare opportunity to have the U.S. Ambassador in the newsroom. We are delighted to have you here. We are really encouraged and heartened by your presence."

Following the statement, Bass explored the damage of the violent attacks against daily Hürriyet, and the door that have been pelted by a mob of protesters two times in less than 48 hours.

Turkey’s daily Hürriyet had been assaulted by around 100 protesters that have arrived at the outer gate of the building at 8:30 p.m. on Sep. 8, after a similar attack on Sep. 6, with four gunshots heard as they approached. Protesters have forced their way into the garden despite the presence of riot police. Soon after the attack in Istanbul's, Hürriyet's Ankara office, where its printing center is located, has also been assaulted.

“Attack on Hürriyet building marks ‘black page’ for Turkey’s democracy” has said the Chief Editor of Hürriyet Sedat Ergin, while the assaults were condemned by associations for freedom of press, right organizations and certain political authorities.

Accordingly, international media organizations have made a wide coverage of the attacks against media in Turkey.