The loss of appetite in the Turkish economy since 2012 continues to be a problem, even if there was a slight recovery in 2015... 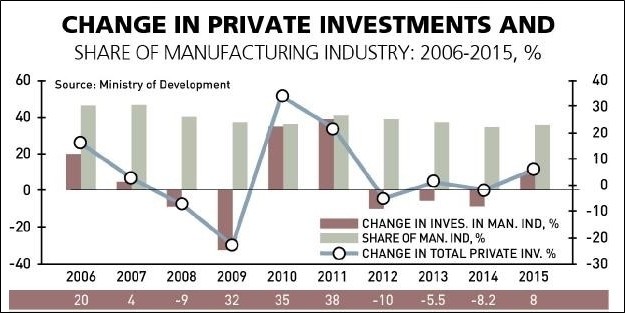 The loss of appetite in the Turkish economy since 2012 continues to be a problem, even if there was a slight recovery in 2015. The slippage especially in industrial investments is remarkable and, simultaneously, a warning.

Why is industry more important? The reason is that the share of industry in gross domestic product is relatively small at 16 percent but industry constitutes the bulk of exports. The intermediate goods in imports and investment goods are also linked to industrial production. Thus, all the service sectors associated with foreign trade feed on industry. In short, because the manufacturing industry is a sector that has a small share in production but a big role in sustainability, the decline of investments in this sector means a decline in the economy, according to an analysis from Mustafa Sönmez, published on Hürriyet Daily News.

In 2012, it was again negative. Overcoming a period in which growth is unable to take advantage of investments, especially when industry investments slip, and reaccelerating again remain two of the most important issues for Turkey’s economy.

The 2012-2015 period can be described as the “low growth” period. In this period, while growth fell to the 3 to 4 percent band, the situation was created because of a deceleration of investments. In these four years, private-sector investments particularly fell concretely, but in 2015, there was a slight recovery.

While private-sector investments declined in general, the share of manufacturing in 2006 was 46 percent, which then decreased 10 points to 35 percent, the average of the 2012-2015 period. Incentives The stagnation of investments in industry can also be observed through the incentives issued regarding the quantity and composition of investments.

The incentive system was explained in the 2016 program:

“It is the main aim to increase private-sector investments that are necessary for a high growth, by making the investment environment more attractive and encouraging investments. The aim of the practice is [to ensure] investments with added value and a high R&D content, increase employment, exports and production, improve international competitive power and enable the regional potentials to join the economy.”

In this context, the balance sheets of the past three years of investment incentives demonstrate the lack of appetite once more in the investment in the manufacturing industry.  While incentives were issued for investments worth 96 billion Turkish Liras in 2013, this dropped to 64 billion liras in 2014 before rising to 103 billion liras the following year. The recovery in 2015 is noteworthy; however, when analyzed closely, this increase in the amount of investments was due to one incentive issued to TANAP Doğalgaz İletim A.Ş. worth 23.2 billion liras.

The international hot money that started withdrawing in mid-2013 with the American Central Bank Fed’s rate hike signal that has rapidly increased the dollar/lira exchange rate made the investor enter a “wait and see” phase. When the increase in the dollar price was followed by the increase in interest rates, domestic consumption which is the main pillar of growth rapidly shrank. This was the most influential factor in the suspension of new investments, particularly investments in manufacturing industry. Besides economic fragility, the election calendar in Turkey, in which there were three elections in 2014 and 2015, has been another factor resulting in a suspension of investment intentions. In addition to these, the tensions in the Middle East and their ramifications in Turkey, the tensions experienced in neighboring countries have constantly postponed decisions for both domestic and international investors.

THE WORLD's “POOREST” PRESIDENT MUJICA...
Former President of Uruguay, Jose Mujica, known with his life style sharply different from most of other world...